The term prestate can be confusing because its meaning
can vary from state to state. In Arizona's case, it means any
license plate issued before the state-issued plates appeared
in January 1914. So it includes all the plates before statehood
in February 1912 as well as the 2 year period after statehood.
Our good neighbor to the East, New Mexico, started issuing
state-issued plates immediately upon statehood in Jan. 1912
so their prestates are strictly anything before their statehood.

Seven months after Arizona became a state in 1912, motorists were required to register their
vehicles with the Secretary of State and upon doing so were issued a 2 inch diameter aluminum disk (seal).
Stamped with a registration number, 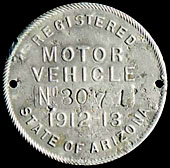 the disk was required to be mounted
somewhere on the vehicle usually on the dashboard. Since the State only issued disks and not plates
from 1912 to 1914, it was the responsibility of the motorist himself to come up with a license plate with
a number matching the number on the disk. He could either purchase one from various private businesses,
or even make it himself. The plates were made from a variety of materials including wood, leather, and metal
The numerals were to be at least 3 inches in height and 1/2 inch wide along with the state initials ARZ.
The first disk was stamped 1912-13 simply because it was issued late in the year ( first registrants on Sep.20,1912 )
and it allowed motorists to be registered thru the end of the following year. Registration disks also accompanied
state-issued plates from 1914 thru 1916 and then were discontinued.
Motorcycle registrants were also issued disks during this same period. (See MC, 1914-)

1913 metal plates
Kits were available to assemble your own plate.
The metallic characters had tabs that were inserted into the upper and lower slots. 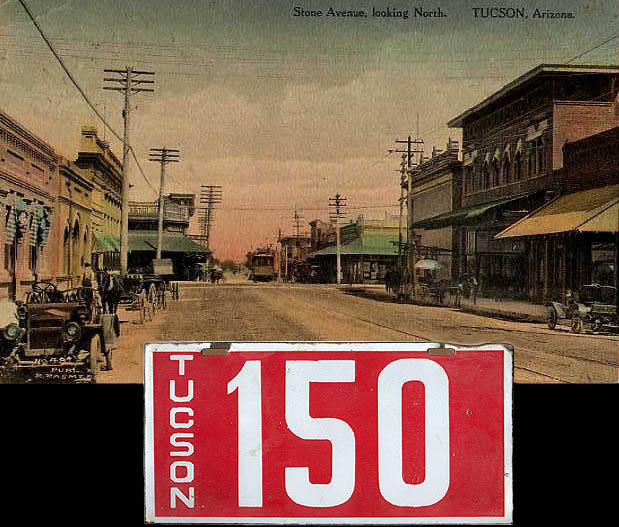 Other known 5"x 10" Tucson plates all in private collections. #333 is also known.

In Tucson an announcement was made in late June 1910 that 400 new plates of the most approved design had
been ordered and within three weeks motorists would be able to come in and replace their old time-worn and
battered plates for the new ones. So it appears that the porcelain Tucson plates can be dated to July, 1910 and
there was an unknown type that preceeded them.

The four porcelain survivors shown above are believed to be from Douglas Arizona but can't be verified with 100% certainty.
All measure 4.3 X 7.8 and are from private collections.

The two photos to the right were taken in Mesa City at Statehood Day festivities, Feb.1912.
CLICK on All for LARGER Images.