Everyone knows the lowest-numbered plate made, it's
usually #1. The highest numbers will never be known since
actual plate production statistics are not known to exist. So to
get some idea of how high plate numbers reached, one needs
to keep track of the highs. Some of the highs are unissued
plates that were never registered to vehicles. Plate
overproduction was common in Arizona and at times exceeded
the actual vehicle registration figures by 25% or more.

The tables that follow show the highest numbers known
for every year from prestate to 1958. With the exception of
1912-21, and 1947, all other plate numbers are from actual sightings.
1912-21 are documented Motor Vehicle statistics. 1914 and 1917
are from unissued plates that were known to exist at one time.
Blank cells mean that no sightings from that county/year have
taken place as of yet.
Many of the figures are very beatable while others will
be difficult to surpass.

If you happen to have any plates that top the charts, feel free to
contact me at AzPlates@Yahoo.com and updates will be made.

Special thanks goes out to Wally Punzmann and Eric Tanner
for their efforts in getting these highs all started.

This #7159, is near the top of the 1915 registrations.
Photo was taken on Yarnell Hill, between Wickenburg and Prescott, Az.

Thanks again to Eric Tanner for his historical contribution! 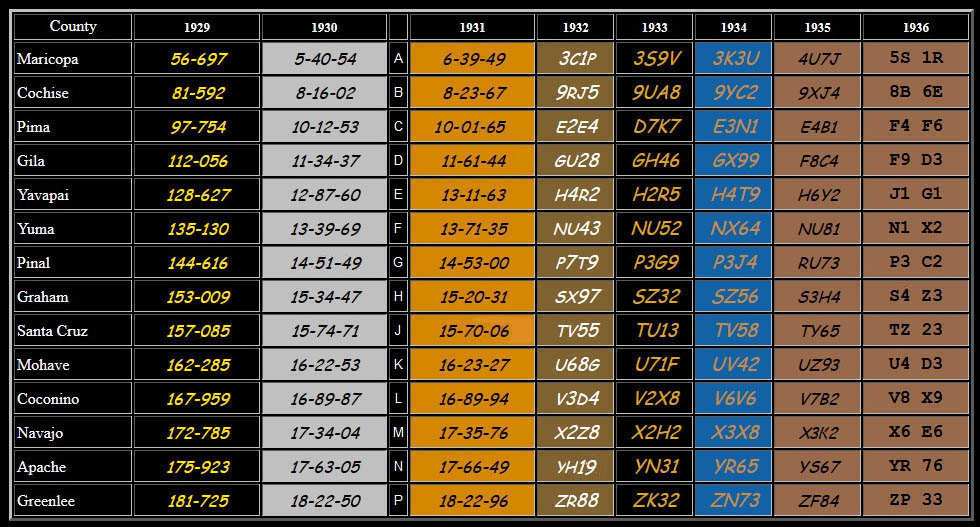 This 1931 Greenlee County is the highest known of all the 1931 plates.